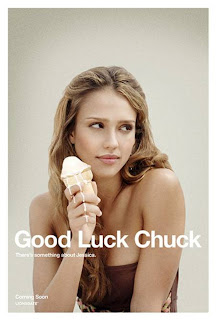 Made in 2007, Good Luck Chuck is the story of Chuck (Dane Cook), a dentist who gets cursed by his school mate about never finding true love in life during a game in his childhood. If this sounded bizarre, try gulping down this- the extension of the curse is that any girl Chuck lands up with is guaranteed to find true love in her next relationship.

At first, Chuck is a bit bothered about the effects of the curse but goaded by his horny best friend Stu (Dan Fogler), he decides to make the most of it. So all he does is sleep with women beyond, before and after his working hours. All is fine until he runs into Cam (Jessica Alba) a penguin lover, so passionate, her only ambition in life is to meet Howard, a world renowned penguin expert. While Cam takes no initial liking to Chuck, it is only a matter of time before they start seeing each other. Chuck, convinced that this is the girl of his dreams wants to do everything right in this relationship and tries his best to ward off the curse with help from his friend Stu. A misunderstanding then leads to a supposedly comical situation that eventually leads to the climax. I can assure you this is not a script written by sane minds at work. Mark Helfrich, the director was a primary editor on movies such as Rush Hour, After the Sunset and Red Dragon. How and why he came about directing a movie as inferior as Good Luck Chuck is anybody's guess.

Dane Cook's macho demeanor and expertise in bedding women is very ordinary acting fare. The charm that typically exudes such a character is missing. Instead, what we have is crass lines being substituted for wit and some below-the-belt humor being flogged around by Stu. Jessica Alba, though, is a saving grace. Her smile and natural screen presence as the vivacious and accident-prone Cam is the only stuff brings a smile to your face. What would've worked better is if the pair had some natural chemistry going like Dane Cook and Kate Hudson did in the 2008 flick - My Best Friend's Girl. .

Looking back at Good Luck Chuck, there's little else to write home about. Some of the gags are in such low taste (such as the Stu's girlfriend who has three boobs) that even a cringe is not good enough to help you get rid of it. The best you can say about Good Luck Chuck is that while you're watching it you feel happy that they cast Jessica Alba in it; everything else will give you a sore eye.

Once ordering replica watches uk and fashionable jewellery watch, users needs to be attentive that there is a number of suppliers you can get which will generate copy and fake running watches expressly with the black colored advertise. Even while hublot replica uk can offend various some of their design in high-quality wrist watches, some people realize that distributors to be reliable good enough to mention that tag heuer replica sale typically are not realistic. Sorry to say, most of these suppliers you should not divulge this post additionally, the uneducated individual resulted on rolex replica sale them all as though they are really honest. To figure out in cases where a sit back and watch is without a doubt realistic, an important fake as well as a copy expensive sit back and watch, determines the internet site belonging to the brand. An important firm’s negotiator are also able to try to make which will enthusiasm as a result of reviewing that mannequin and even 365 days it was subsequently produced. They may recognize skillful differences with the model and tones that a lot many people won't be able to. To order a economical expensive sit back and watch and antique collectible jewellery watch, you might want to assess an important pawn browse, a lot of involve some fashionable running watches to their selection, not plenty considering most people will the master of replica watches sale couldn't pawn their very own expensive sit back and watch.

IssacMJ
" No, I don't like going into a film once it's started.."